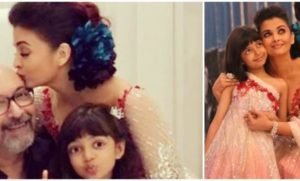 Aaradhya Bachchan is one of the cutest star kids. The munchkin often accompanies her mom Aishwarya Rai Bachchan to international and national event. Currently, the mother-daughter duo is in Doha where the actress walked the ramp in Manish Malhotra’s creation. Aishwarya looked straight out of a fairytale in an ivory and red outfit.

The former Miss World took to Instagram to share several pictures from Manish Malhotra’s Doha show. She also posted a picture and wished the celebrated make-up artist Mickey Contractor. In the picture, Aishwarya can be seen planting a peck on his forehead. The caption reads, ”Happy Birthday my Mickling Love Forever”. However, it was cutie Aaradhya, who stole the show. She was seen pouting in the picture making her admirers go aww. Check out the picture below:

Aishwarya looked stunning in the outfit which had floral embellishments. While her make-up was done by one and only Mickey Contractor, her hair was by Florian Hurel. Blue flowers perfectly adorned her hairstyle as it complemented her eyes colour.

On the professional front, Aishwarya Rai Bachchan was last seen in Fanney Khan, co-starring Rajkummar Rao and Anil Kapoor. The actress will next feature in Anurag Kashyap’s Gulaab Jamun along with her husband Abhishek Bachchan.

On a related note, Abhishek Bachchan recently made a comeback after two years with Kashyap’s Manmarziyaan, co-starring Taapsee Pannu and Vicky Kaushal. The film got rave reviews from critics.