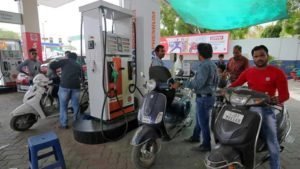 Finance minister Arun Jaitley on Thursday announced a cut of Rs 2.5 per litre on the prices of petrol and diesel. According to data from Indian Oil, the existing levels of excise duty on petrol and diesel (as on 1 October 2018) are Rs 19.48 per litre and Rs 15.33 per litre. Jaitley also called upon state governments to undertake similar cuts in state Value Added Tax on petroleum. Twelve states have already announced a cut of Rs 2.5 per litre on these taxes. Some states had announced cuts of varying magnitudes earlier. Thursday’s cuts will lead to a reduction of Rs 5 per litre in petrol-diesel prices. Petrol and diesel prices have increased by 19.8% and 26% between 1 January and 3 October this year.

The relief however is likely to be temporary, as crude prices are expected to rise in the future and probably cross the psychological barrier of $100 per barrel, last seen in 2014. A falling rupee will mean that prices increase even more in rupee terms.

On Thursday, crude was trading at more than $85 a barrel, and the rupee closed at 73.58 to the dollar. The chart given below shows the monthly average of petrol and diesel prices in Delhi and the price of India’s crude oil basket till September 2018.

Petrol and diesel prices have increased by Rs 7.2 and Rs 7 per litre in the month of September itself. If the crude and rupee continue their current trajectory, the relief from government’s tax cuts will nullify itself in a very short period. The question is whether this will be a one-off cut in petroleum taxes or will more such moves follow as elections come closer.