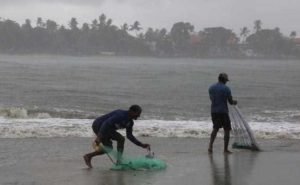 Kerala, ravaged by the south west monsoon in August, is bracing for more rains with a low pressure area likely to form over the Southeast Arabian sea, as the state government stepped up disaster preparedness on Thursday. Kerala will receive heavy to very heavy rainfall for the next five days and a district wise warning has been issued in this regard, said K Santosh, director of Kerala’s meteorological department.

“Heavy rainfall is expected till ninth of this month and heavy to very heavy is expected for the next five days. As much as 21 centimeters or more is expected in Southern region at one two places and we have issued district wise warning accordingly”, Mr Santosh told news agency ANI.

Kerala’s neighbour Tamil Nadu initiated preventive measures following a weather forecast that parts of the state may receive heavy to very heavy rainfall in most places and extremely heavy rainfall in some areas on October 7, officials said.

The Karnataka government too sounded an alert in 12 districts as the India Meteorological Department (IMD) said heavy rains were likely in South interior parts of the southern state.

An weather bulletin said the low pressure area could intensify into a cyclonic storm, triggering heavy to very heavy rainfall in several parts of Kerala.

In view of the weather forecast, a red alert has been sounded in Idukki and Malappuram districts with heavy rains expected on Sunday.

“It is very likely to concentrate into a depression and move northwestwards during subsequent 36 hours and intensify further into a cyclonic storm and move towards Oman coast,” the bulletin said.

Shutters of dams in Thrissur and Palakaad districts were lifted this evening to drain out excess water.

The sea condition is also expected to be very rough from Saturday and fishermen have been warned not to venture into deep sea.

The state had witnessed the fury of the southwest monsoon in August, the worst in the last 100 years, which claimed 493 lives and swamped several districts.

Deputy Director General of Meteorology, Chennai, S Balachandran told reporters at Chennai that rains were likely in Tamil Nadu and Puducherry in the next three days, with the possibility of heavy rainfall in one or two places.

Many areas in the state, including Chennai, and neighbouring union territory of Puducherry received rains in the last 24 hours with some parts receiving heavy showers, he said.

Most educational institutions in the union territory remained closed Thursday in view of the intermittent rains which started Wednesday night, officials said.

Water logging was reported in some residential areas on the outskirts of the town. Traffic came to a standstill at some important junctions, they added.

The state too had suffered large scale destruction during the south west monsoon in several districts, including Kodagu, Dakshina Kannada and Udupi, during August.