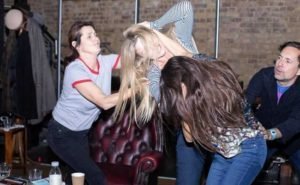 “People Like Us”, a tragi-comedy by the columnist Julie Burchill and novelist Jane Robins, asks whether it is possible to stay friends with people who hold opposing views.

The play was sparked by what the Brexit-backing writers felt was a social outcasting of Leave voters by more vocal, self-righteous Remainers — particularly in the fervently pro-EU London artsy circles.

“It’s what they call projection. Everything they accuse us of, they are: a small, monocultural clique,” Burchill, 59, told AFP.

“They call us bigots — but they won’t listen to us for a second!

“By projecting all their sins onto us, they are cleansed.”

Robins, 60, said she was invited to several Christmas parties in 2016, six months after the Brexit vote — and avoided the lot.

“I knew they would all be so miserable. Christmas wakes,” she told AFP. “Every single one was going to be Remainers moaning in despair — and they would look at me as the one to be blamed.”

Burchill’s stinging columns about Remainers’ “pathetic petulance” and the social backlash aimed at Leavers chimed with Robins. The two met via a mutual friend — and set about penning a drama.

They found rich inspiration in the aftermath of the referendum.

The vote was bitterly contested and led to relationship breakdowns, friends falling out and even inter-generational conflict between Leave-voting children and Remain-voting parents.

“People Like Us” centres on five friends in a book group and takes place around the 2016 Brexit referendum.

The setting is Ralph’s flat in Islington: the north London epicentre of right-on thinking.

The book group’s first monthly meeting takes place just before the Brexit vote and tensions are beginning to stir.

But afterwards, divisions surface and emotions boil over.

Ralph is consumed by “numbing, excruciating grief; with a top note of despair”, while for Stacey, Brexit was “a revolution I could witness” and the first thing that “actually made me feel something”.

The sniping from both sides culminates in a catfight. The book group breaks up, each side unable to bear the other’s attitude.

Though pegged around Brexit, the drawing-room comedy focuses on the boundaries of modern friendship.

“Because we voted for Brexit, they think we’re evil.

“What the hell’s happened to our society that we can’t be friends with people any more because of this vote? It’s bizarre.”

The play, which runs until October 20 at the 70-seat Union Theatre, sold out before it opened — much to the writers’ surprise.

Given the Remain-dominated atmosphere in the London arts world, they doubted the play would even get put on — and were prepared to stage it in the back room of a pub.

Now the writers hope to transfer to a bigger London theatre and take the play to the Brexit heartlands.

Robins said: “We really hope that people come who don’t generally go to the theatre because it’s alienating for them.”