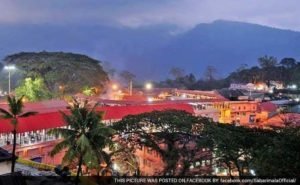 Women cadres of Hindu outfits Saturday offered prayers in temples in Tamil Nadu by holding lamps and saying they would ‘wait’ till they crossed 50 to visit the Lord Ayyappa shrine at Sabarimala, notwithstanding the Supreme Court verdict allowing them entry.

The cadres of Bharat Hindu Munnani met at the Sri Gangadeeswara temple, saying they would not visit the shrine till they crossed 50 years of age and the menstrual cycle.

A participant in the prayer meeting said, “For us, the ancient customs hold good all the time to come irrespective of whether a court favoured it or not.”

“These are prayer meetings to reaffirm our faith in our customs. In such meetings, women visit temples only in accordance with our beliefs,” he told PTI.

Women pledged (called ‘kathiruppom,’ meaning let us wait) to offer worship at the temple in Sabarimala only when they attain the age stipulated by “customs and beliefs,” he said.

Signatures, collected as part of a campaign in this connection, would be submitted to the notice of the Travancore Dewaswom Board which administrates the shrine in Sabarimala, he said.

The Supreme Court, headed by Chief Justice Dipak Misra, had Friday said banning the entry of women into the shrine is gender discrimination and the practice violates rights of Hindu women.