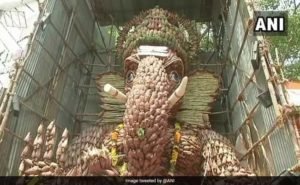 Keeping up with the eco-friendly theme for Ganesh Chaturthi celebrations, an idol of the elephant-headed God was made using banana flowers in Chennai.

Around 7,000 banana flowers were used to build the mammoth 10-feet idol which took around 10 days to construct.

The idol is constructed in a seated position with a swastika sign on its blessing hand.

Devotees gathered in large numbers to witness this unique idol and clicked selfies with it.

In Maharashtra, where the festival has a greater significance, many idols have been created using clay and other degradable materials.

In Bengaluru, Sathya Sai trust made a Ganesh idol using sugarcane. After the pooja, the sugarcane which is used to make the idol will be distributed in the public.

The Hindu festival, which is dedicated to the Lord of new beginnings, Ganesha marked with the installation of the deity’s idol at home and at elaborate pandals. The 10-day festival ends with the final immersion – also called the Visarjan – of Lord Ganesha’s idol.