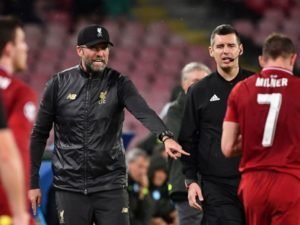 Liverpool manager Jurgen Klopp reckons a midweek Champions League defeat by Napoli could inspire his side when they face Premier League leaders Manchester City in a top-of-the-table clash at Anfield on Sunday. Liverpool are currently second to Manchester City on goal difference alone but, for all the praise they’ve received so far this season, the Merseysiders have not won in three games — a League Cup draw and Premier League loss to Chelsea followed by Wednesday’s 1-0 defeat by Napoli.

But having had time to reflect on that reverse in Italy, Klopp told a pre-match news conference on Friday: “After the game it felt much more clear they deserved to win than after the analysis.

“Yes they (Napoli) had more chances, we didn’t have a shot on target,” the German added.

“In the last 15 minutes they had two big chances and scored a goal, they had moments more than we did.

He added: “Now we will have three days together until we play Manchester City and (we could) make the boys aware of what was all wrong.”

“I didn’t want to lose at Napoli but, if you ask me which is the best preparation mood-wise, it’s losing a game.

“We felt it now and we don’t want to have that feeling again so we will fight with all we have for a different result.”

Liverpool have won their last three matches against Manchester City, including both legs of a Champions League quarter-final last season.

But Klopp rejected suggestions he had some special hold over Pep Guardiola’s side.

“Obviously we won the last three games against Manchester City. After none of these games you go into the dressing room and think, ‘Now we’ve got it, now we know how to beat Manchester City’, because there is no real way, no one thing that you have to do,” said Klopp.

“You have to be ready, you need a fantastic football team — which thank God I have — with outstanding character, ready to be really brave, ready to make mistakes. Then it can work.

“That’s all we need to know. When somebody’s telling me, ‘Good luck for Sunday’, I think always, ‘Unfortunately, we need it’. But that’s no problem; if you work hard, you earn it.”