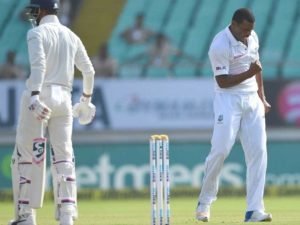 Indian spinner Harbhajan Singh on Saturday made a startling revelation about the current Windies team. The Windies are at the moment struggling against India in the ongoing 2-match Test series. It all began with a tweet posted by renowned cricket commentator Harsha Bhogle recalling the explosive “West Indies” team that boasted of great players and fast bowlers alike. “The “West Indies” to me signifies so many things. Great players, fast bowlers, charismatic batsmen, great crowds, fun, respect for cricket, no sledging, music….. so much. Guess “Windies” is appropriate now. I still wish the “Windies” can become the “West Indies”, he posted. Replying to Harsha Bhogle’s tweet, Harbhajan Singh wrote, “Sad to see this situation of West Indies cricket.. there was a time when people fear playing against them.. hope they do get some good players and compete at international level.”

The Windies are in India for a long tour in all the three formats. The first Test in underway in Rajkot while the second Test begins on October 12 at the Rajiv Gandhi International Stadium, Hyderabad. The five-match ODI series will begin from October 21. The second, third, fourth and fifth ODI will be played October 24 in Indore, October 27 in Pune, October 29 in Mumbai and November 1 in Thiruvananthapuram respectively.