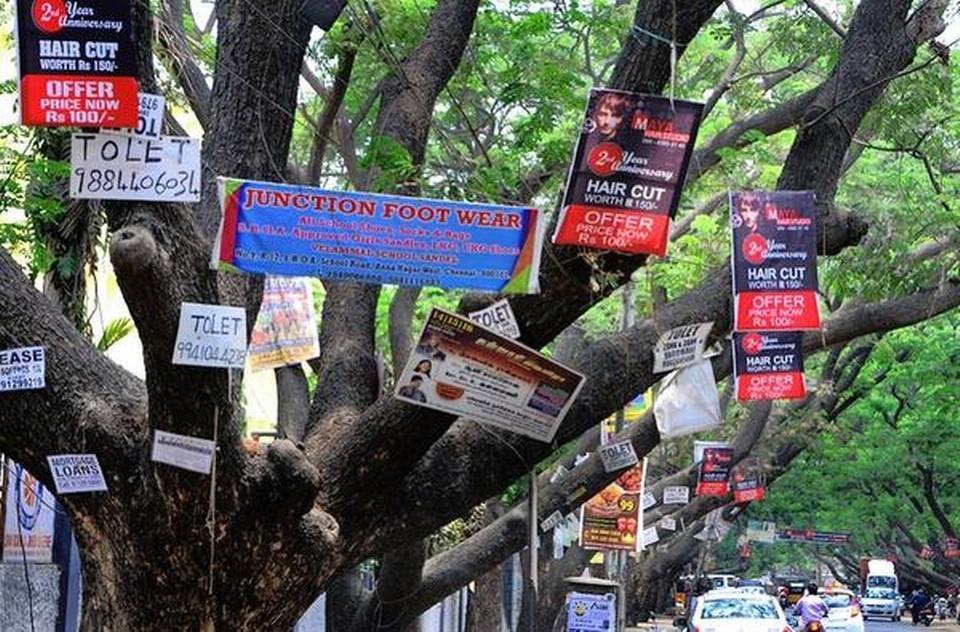 In a bid to save the city’s trees, the Chennai Corporation has warned that individuals and companies damaging trees maintained by it would face a hefty fine and a jail term.

In a release, Corporation Commissioner G. Prakash said the civic body was maintaining trees on arterial and interior roads to maintain green cover. For the trees to grow well, they require good soil, water and sunlight. The public have a duty to protect the trees from external damage, the release added.

The civic body has taken serious note of private parties and commercial establishments causing damage to trees by nailing advertisement boards or tying the boards around the trees.

Painting of trees and using serial lights, steel rods, wires and other materials on them are also a common practice, he said. Due to such acts, the trees die or their life span decreases, he pointed out.

If they fail to do so, the Corporation will take action against the establishment/individual concerned under Section 326-1 of the Chennai City Municipal Corporation (CCMC) Act, 1919, which attracts a fine of up to ₹25,000 and three years’ jail term.

Shobha Menon, environmentalist and founder of Nizhal, said it was a shot in the arm for the much-abused trees across the city.

“Trees in cities play such an important role, but they continue to be abused,” she said.

Nizhal’s ‘Free the Tree’ campaign to support trees in the city started 14 years ago, as part of which, volunteers removed hoardings and nails and plugged the gaps with turmeric and clay with the support of the Corporation.

“But this could only serve as an awareness campaign and community outreach. A strong statement of this nature from the GCC is welcome and we are grateful on behalf of the trees of the city. But citizens need to do their bit too by reporting offenders and follow-up action, and support the Corporation wherever necessary,” she said.

People can inform the civic body about such complaints through the 1913 helpline, he said.