Prime Minister Modi was speaking on the practice of members rushing to the centre of the house and shouting slogans while raising protests in the house. 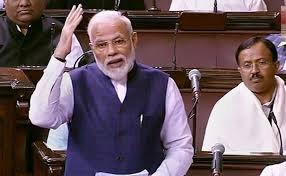 Prime Minister Narendra Modi’s shout-out for Sharad Pawar’s Nationalist Congress Party (NCP) in parliament, at a time the party is engrossed in all-out efforts to form a non-BJP coalition to take power in Maharashtra, drew much comment on Monday. PM Modi was speaking at a special discussion to mark the 250th session of the Rajya Sabha or upper house of parliament.

“These parties have wonderfully adhered to parliamentary norms. They have never gone into the well of the house (to protest). Yet, they have made their points very effectively. Every political party, including my party, should learn from them,” PM Modi said.

The Prime Minister was speaking on the practice of members rushing to the centre of the house and shouting slogans while raising protests in the house.

The praise for NCP stands out at a time Sharad Pawar is a key player in trying to stitch the unlikeliest of all alliances in Maharashtra, between the Shiv Sena, NCP and Congress. And especially when the Shiv Sena, the BJP’s oldest ally, today officially sat in the opposition benches after their falling out over power sharing in Maharashtra.

PM Modi’s BJP opted out of the race to form a government, after long-term partner Shiv Sena refused to continue the alliance without a guarantee of equal partnership, including rotational chief ministership.

The Shiv Sena, which won 56 seats in the 288-member Maharashtra assembly, immediately pulled out its only minister from PM Modi’s government and began talks with the NCP and Congress. The three together have 154 seats, nine more than the majority mark.

The Sena almost staked claim to power last Monday when it was forced to instead request the governor for more time, after the NCP held back its letter of support. The Congress said it needed more discussions.

Many in the NCP believe Sharad Pawar is under pressure from the centre to stall the alliance. Top NCP leaders like Ajit Pawar and Praful Patel have been booked in Enforcement Directorate cases.