From walking or cycling back in 41 degrees Celsius in Andhra Pradesh to a spell of rain in Telangana early on the morning of May 11, workers were slowly making their way back home.

A police constable at a check-post stopped our car and asked us to park on the roadside. It was about 11:30 am on May 12.

This was when we – 32-year-old cab driver Thangaraj Sampath and I – were cruising along, believing that our long road journey from Chennai to Delhi would end in a few hours. We were about to cross Madhya Pradesh into Uttar Pradesh, with a brief stretch of Dholpur in Rajasthan in between.

I had procured an e-pass for the long journey – beginning on May 10 and ending on May 12, with fortuitous night halts for a few hours in virtually empty guest houses – that was about to come to a relieving end.

I got out of the car and asked the constable at the check-post what the matter was, as I had a valid e-pass to drive from Chennai to Delhi in a car not having more than two passengers.

The constable said that migrant labourers had jammed the road ahead. I could see a crowd of people on the highway, the distance having reduced them to small specks on a road that was largely empty, save the trucks that were parked ahead of us. I could also see vehicles parked on the road on the opposite side, awaiting a go-ahead the way I did.

It was a single road at the junction of Datia and Gwalior, the border of the two MP districts being marked by a single bridge atop a small stream that seemed to be an apology of a river or canal.

I got a chance to step out of the car – a mask covering my face and mouth – and free my legs that had developed hints of pain in the knee as a result of a long road journey.

I struck a conversation with the policemen manning the post. “Have labourers jammed the road?” I asked, not revealing that I was a journalist heading home.

“Haan bhai sahib, labour beech beech mein road jam kar deta hai. Bechara kya karega? Abhi thodi der mein hat jaayega (Yes, labourers are jamming the road these days. What option do they have, after all? They will disperse in a while),” the cop replied.

I asked if I could turn back and take another road. On learning that I was going towards Delhi-NCR, the genial policeman asked me to wait, as the other road would entail an additional journey of 200 km.

I waited for a few minutes and called up a senior police officer of the MP cadre who is an old friend to figure out if there was an alternative route. “You should wait where you are,” he said. “Labourers keep jamming the bridge at the district border each day, but they clear the road once the administration convinces them to.”

It happened exactly as predicted. Vehicles from the opposite side began to move in about half an hour, and in another 10 minutes, the policemen signalled to us to move. As the car crawled ahead slowly, crossing the bridge, I saw labourers – men and women, with their children – boarding two buses that had been arranged to move them from the spot. On the left side, I saw a water vehicle manned by a Sikh man offering drinking water to the workers.

The spot of the jam was strategic, with workers repeatedly jamming the road and the administration promptly sending vehicles to ferry them a distance, providing a much-needed break to their aching limbs as they walked, with bags on their shoulders and sometimes toddlers in their arms, braving the May heat to reach their villages.

The entire road from Chennai to Delhi – via Hyderabad, Nagpur, Chhindwara, Lalitpur, Gwalior and Agra – presented the same sight every few kilometres.

I could see workers walking towards the north in groups of 10-12 people. There were some groups that were riding their bicycles.

To stop and photograph them seemed voyeuristic. I did not want them to think I was capturing a painful sight and then speeding off in my car. Yet, I did try to click some of the groups from the moving car, understanding that I was capturing the largest distress migration on foot perhaps in the history of India or even the world in recent years.

There were places where I saw them huddled on the roadside under the shade of a tree, catching their breath as they tried to make it to their villages thousands of kilometres away.

I did not see cops harassing them. Constables could not help them much, but seemed to feel their anguish. The journey of 2,200 kilometres from Chennai to Delhi by road may not be representative of what has been happening all across India, but it did offer a peek into the long journeys on foot or bicycle being made by perhaps lakhs of workers.

Even after 45 days of the lockdown, the trickle of migrant labourers hasn’t stopped. News reports suggest that many have moved because their employers haven’t paid them during the lockdown, adding insult to injury. Many find themselves in what has become alien territory in the absence of work, far away from the emotional comfort of their villages at the time of a raging pandemic. Many can’t pay rent in the absence of a flow of income, and have no surety the administration can provide them food where they are. They also feel the need to go back to their families, even if it means staying in quarantine for two weeks once they reach.

How many will reach safely is a moot question. Some stand the risk of getting infected, as truck drivers sometimes offer large numbers of workers a lift. They have to battle the elements.

From walking or cycling back in a temperature of 41 degrees Celsius in Andhra Pradesh to a spell of rain in Telangana early on the morning of May 11, I saw workers slowly making their way back home.

One may not know the precise scale of the return migration, but it seemed huge. As I entered Noida from the Yamuna Expressway, I noticed that all tea and paan shops were shut. These small, often unauthorised, shops dotting the industrial township are locked now. It seems all those who earned a living selling paan and cigarettes here have returned to their villages, often in eastern UP and Bihar.

“It seems that the population of Delhi is down by 30%, though we don’t have precise numbers. The small vendors and thelas in all localities have shut down,” a journalist friend in Delhi told me over the phone.

Have these people returned safely to their villages? Whether they will return and the national capital region will spring back to normal once the lockdown is over – even if with higher numbers of COVID-19 infected people – is something only time will tell. But the absence of these people is a marker of acute economic distress that may well outlive the pandemic.

I reached home in the evening of May 12. The journey had been a daunting one, and it was the need to somehow reach home with a low chance of infection that made me undertake it after much thought of the pros and cons. Yet, as the cab drove past the country, I felt privileged. And, for once, this wasn’t exactly a comforting thought. I could get an e-pass, could arrange for a brief halt at night, could pack food that would not go bad for three days and also pack 25 litres of drinking water for the journey. 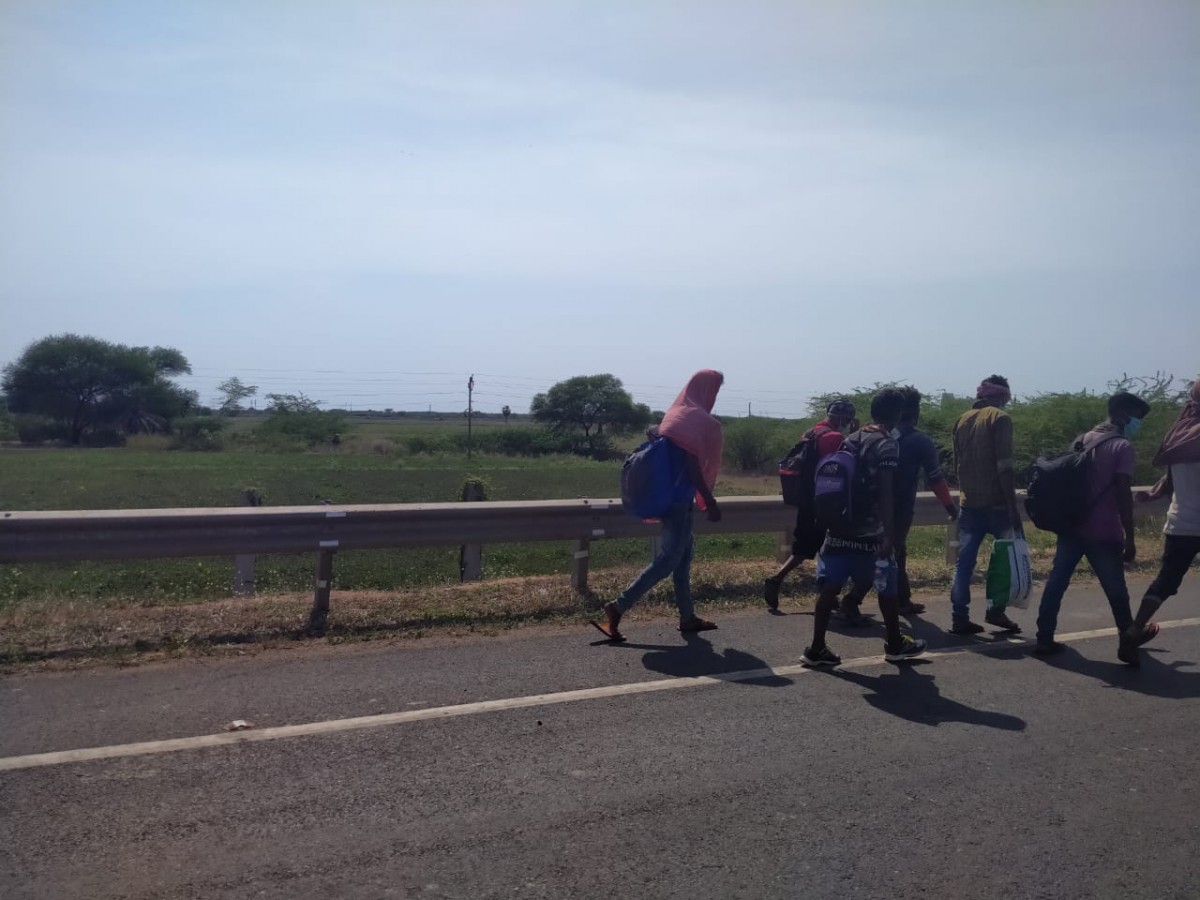 I did not have to halt at a single dhaba – quite a few of these were open – and could try my best to minimise the risks of the journey.

But so many people walking on the roads had no such chance.

I also called up IAS and IPS officers known to me in each state beforehand for help or to put in a word with the local administration in case the police stopped my cab, bearing a valid e-pass, anywhere on the way. But the police in all states were cooperative and let the vehicle pass after noting down the pass details and my phone number.

Even a long and tiring journey seemed to be a privileged one, as a result.

However, one worry was how the driver would get back home, as the default setting of the Tamil Nadu e-pass allowed one not to have a valid permit for more than four days and three-and-a-half nights for a to-and-fro journey of 4,400 km.

I applied for a return e-pass for the driver on both the Delhi Police and Delhi government websites to ensure that he doesn’t have to rush without rest to beat the deadline and face problems at a check-post. The Delhi Police website sent a prompt message rejecting the application – even when the address, the registration number of the car and Aadhaar number of the driver were all of Tamil Nadu, the destination – and the Delhi government website showed the approval as pending for the entire duration of the journey.

A friend in Delhi Police offered to help to provide him a pass to travel back if I sent a written letter with my signature. However, the driver did not want to risk losing a few more hours and headed back after dropping me.

I kept in touch with him throughout the journey. He made it back to Tamil Nadu in well below 48 hours and sent me a photograph of himself washing his car.

The journey was one of hardship that paled in front of what others had to undergo.

India may be in a lockdown but Bharat is slowly on the move. And in the most challenging of circumstances, with little except hope to battle uncertainty and penury.