TikTok ‘influencer’ Faizal Siddiqui whose month-old video has resurfaced online which allegedly promotes acid attack and abuse on women. The National Commission for Women wants it to be taken down now. 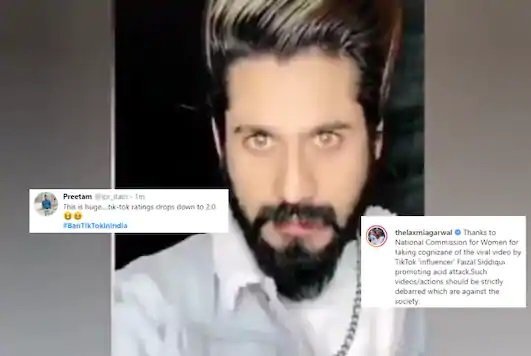 Acid attack is no joke, let alone be “content” on popular video-sharing platform TikTok for millions to consume. Making this very clear, The National Commission for Women (NCW) on Monday said it wrote to TikTok over a video in which one of its users allegedly glorified acid attack and crime against women.

The user in question is “influencer” Faizal Siddiqui whose month-old video has resurfaced online which allegedly promotes acid attack and abuse on women.

Siddiqui, who enjoys more than 13 million followers on the platform, can be seen mouthing “Did the man you left me for abandon you?” before taking a glass filled with liquid and splashing it on his “girlfriend”. The video ends with the woman’s face changed– she has make-up depicting scars after the alleged “acid attack”.

He is Faizal Siddiqui , member of team nawab and brother of Amir Siddiqui. Friends he have 13.4 million followers on his Tik tok account. I request to all pleas share this video in large number of girls. is he deserve any follows? #RespectGirls pic.twitter.com/3vnEPN21Dk

Soon after, the Internet started praising NCW for their swift action.

Laxmi Agarwal, who in 2005 at the age of 15 was on the receiving end of an acid attack, and has been a fierce voice against the sale of acid, thanked the NCW for taking cognizance of the video.

Laxmi, whose story has been told by Meghna Gulzar and Deepika Padukone in Chhapaak, wrote:

“We are working day and night to stop the acid attacks, violence against women. This cringe activity is not called influencing but promoting crime. Such persons are a curse to our society. So it is important to ban such videos and accounts from the social media. Come forward-we urge you to stop acid violence-Stop Sale Acid.(sic)”

Guys, help me out here.
Isn't this video normalizing/promoting violence against women?
Tiktok has become an underbelly of such hideous content. Acid attacks, violence, spitting, and what not!
Both Faizal Siddiqui and the girl involved in this video should be booked! pic.twitter.com/wK9u6wmKmm

“The Commission is seriously concerned about the increase in crimes against women. The video not only seems to promote violence against women but shows the patriarchal mindset which would send a very wrong message to the society.”

@NCWIndia have contacted Tik-Tok India @TikTok_IN to remove the video & delete the account of #FaizalSiddiqui that instigate committing violence against women. pic.twitter.com/1QMHpUgQs8