She was murdered by a stalker in September 2021 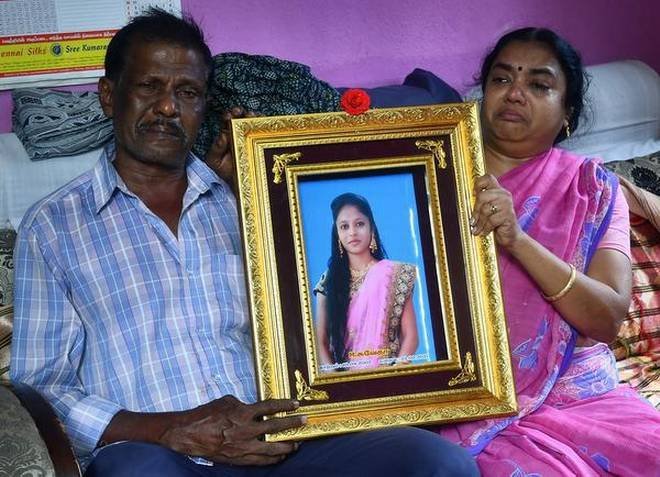 Parents of Swetha, the 20-year-old woman from Chromepet who was stabbed to death by her stalker near Tambaram railway station three months ago, are still fighting for justice. They want the case to be expedited and exemplary punishment handed to their daughter’s killer.

Around 1.30 p.m. on September 23, last year, Swetha was stabbed indiscriminately by a man near Railway Colony in East Tambaram. As she lay in a pool of blood, the man attempted to slit his own throat, but was caught by autorikchaw drivers.

On receiving a call from their daughter’s friend Sangeetha who had been with her, Mathiyazhalagan, 58, a driver with MTC and his wife, Chitra, 50, rushed from their house in Bharthipuram, Chromepet. They were shocked to learn about their daughter’s death. Ms. Chitra said: “On reaching the Government General Hospital, Chromepet, we were told by police that our daughter had been stabbed and died before reaching the hospital.”

Swetha was doing diploma in Medical Laboratory Technology at the Madras Christian College. The assailant, identified as Ramu alias Ramachandran, 24, a native of Tirukkuvalai in Nagapattinam district, had been stalking her for two years. He was working at a private manufacturing unit in Maraimalai Nagar.

According to the FIR filed by the Selaiyur police based on the testimony of Ms. Sangeetha, Ramachandran had called Swetha to Railway Colony Road and she went along. When both were talking, Ramachandran all of a sudden stabbed her indiscriminately with a knife. When Sangeetha attempted to prevent him, he tried to attack her. Then he tried to slit his own throat when was caught by the nearby autorickshaw drivers.

The parents of Swetha were inconsolable and have since knocked several doors seeking justice. Ms. Chitra has been weeping every day looking at her daughter’s photograph and her father has not been keeping well.

Ms. Chitra said: “My daughter was everything for us… We are struggling a lot after her death My husband has been upset and does not go to work regularly.”

“We petitioned the DGP a few days ago stating that the accused should be given punishment that would deter any one else from committing such a crime in future. He assured us that action will be taken,” said Ms. Chitra.

Vijayakumar, who is helping the family in its legal fight, said: “The police have filed the chargesheet in the judicial magistrate court in Tambaram.”